Photos and Review by HEATHER HARRIS

LOS ANGELES, Calif. – Richie Ramone and Band delivered 31 songs in 52 thrill-packed minutes to an enraptured crowd. The drummer and songwriter for The Ramones has a wide range of talent,  alternating the beat-keeping with singing and both singing/drumming duties.

Noted a punk colleague, “Richie breathed fresh life into the Ramones, their set time decreased by over 12 minutes because he played the songs so much faster and sharper than his predecessor.”

Opening act Go Betty Go crossed the fourth wall and spilled out for a stage invasion on one of the dozens of Ramones’ classics Richie wrote, performed alongside his solo works.

Richie Ramone Band played a variety of songs he’s written and performed with The Ramones and in his own band. Many of the favorites are on the set list, including “Labotomy,” “Sheena,” Creetin Hop,” “Rockaway Beach” and “I Know Better,” which is also the name of his compelling book.

Friendly Bear, comprised of Guy Jedidiah, Megan Speer and Adam Bones, were also on the bill and revved the crowd with their upbeat sound. Go Betty Go has been toiling in honor of Betty Cisneros, who is battling cancer, go here to support. 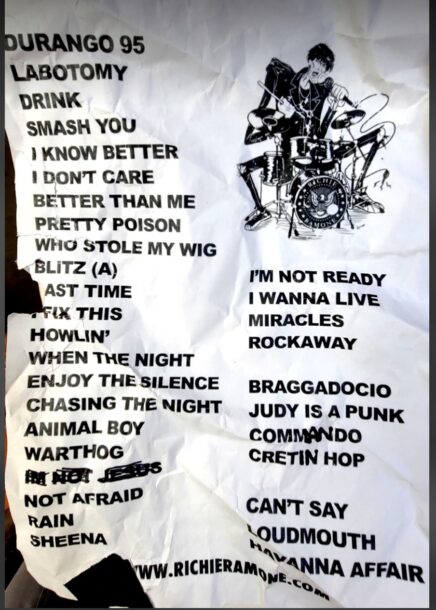 Richie’s experiences with The Ramones are documented in his book, I Know Better Now: My Life Before, During and After the Ramones, available here.

Interview + Photos by NOTES FROM VIVACE On a recent Monday night, Westerner hit the stage at School Night in support of their just released album Kali Yuga Kama Sutra. The opening song from their […]

August 23, 2022 News Musicians, Press Releases Comments Off on Authority Zero to Play Arizona and East Coast to Fete ‘A Passage In Time’

Arizona punks Authority Zero will play a hometown show to celebrate the 20th anniversary of their first album, A Passage In Time in Mesa, Arizona on Sept. 9. The band then goes on to play several East Coast […]