The Interrupters headlined a night of high-energy new wave music and Halloween hijinks at The Fonda Theatre that featured SWMRS, Sharp Shock and Johnny Madcap and the Distractions.

In case anyone was wondering where new wave music went, the night proved the genre is very much alive with each of the bands bringing the post-punk sound to Hollywood.

Johnny Madcap kicked off the night with a rousing set, the band is promoting the new single “Panic!” a commentary on “the uncertainty of the world.”

The last time we caught Johnny Madcap and the Distractions, the band opened for post-punk staple The Dead Milkmen. While that was an impressive show, it’s clear that in a couple of years since then, the band has gotten even tighter.

Sharp Shock singer and guitarist Davey Warsop and bass player-vocalist Dan Smith brought a UK influence to their set. Korey Kingston (The Aggrolites, Suedehead), is a San Diegan drummer whose favorite genres are reggae and ska. This trio gives us hope that ska and new wave will continue.

Frontman Cole Becker was dapper in a whiteface makeup dripping blood and a red granny dress which somewhat limited his physical antics. Drummer Armstrong also had white face with glaring white teeth. At one point the amazingly prolific drummer came out from behind the drum kit and stood on the railing by his devoted fans. At his young age, the remarkably talented Armstrong is one of the best drummers around. Talent runs in his family as he is the son of Green Day frontman Billie Joe Armstrong.

Maybe one of the best things about this band is the humility. These guys know they are fortunate to be playing music for a living, with Cole Becker telling CaliforniaRocker.com that they love their fans. The band spends time with the adoring throngs after their show.

The Interrupters continually and consistently prove they’re worthy of their fans’ devotion. The reggae-ska band led by Aimee Interrupter and brothers Kevin Bivona on guitar, Justin Bivona on bass and Jesse Bivona on drums never disappoints.

The charismatic band jumps, skips and ska-dances their way into their audiences’ hearts. It’s clear there’s a love for their fans and the band doesn’t take the career for granted.  They stole the show at Coachella last year and continue to leap into the hearts of new and devoted fans alike.

Check out our review of The Interrupters at 2017 Coachella

The Interrupters have a new album, Say It Out Loud, that they’re promoting with a tour that brings them to South America and then back to the U.S. through December.

The Interrupters are reminicent of The Specials and One Step Beyond only in a lighter tone. They make for a great performance band, with a dynamic show and fun attitude. Check out The Interrupters website. 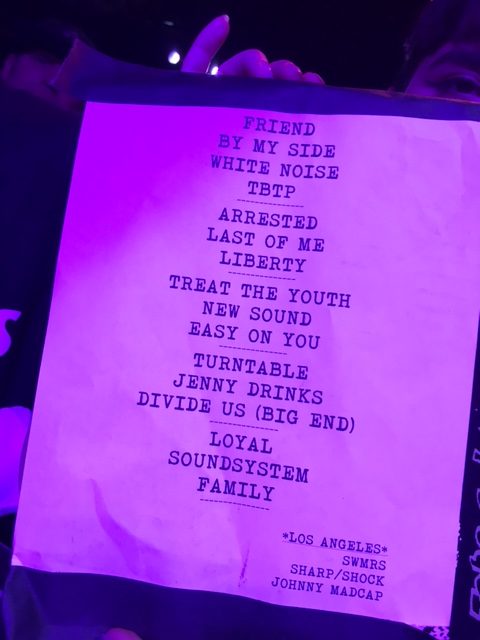 Words and Photos By LUIS MORENO It was the night after Christmas, but for this crowd the best gift was worth the wait as The Untouchables delivered a dose of holiday cheer at Saint Rocke. […]

Joey Armstrong and SWMRS Team with Vans for Art Education

January 17, 2018 News Musicians Comments Off on Joey Armstrong and SWMRS Team with Vans for Art Education

By DONNA BALANCIA Joey Armstrong and his band SWMRS are teaming with Vans in designing cool skate shoes to help support art education. Drummer Joey Armstrong appears to be picked up a paintbrush instead of […]