There aren’t many loud bands left. A Place to Bury Strangers is one of them and their latest EP, Hologram, keeps the torch aflame for staggering listening to come.

The Brooklynite and band progenitor, Oliver Ackerman (guitar, vocals), has welcomed a lineup change for 2021, inviting John Fedowitz (bass) and Sandra Fedowtiz (drums) to join him in his quest to become psychedelic metal machines- fitting words that have all been thrown around to try and define such a quizzical sound. The five tracks on Hologram comprise a body of music fueled by nervous energy, buzz-laden and searching. The record is a jerky ride, insular in an atmosphere in which abrupt cuts followed by doubled-down instrumentals feel like a natural marriage.

The trio seem to have perverted guitar and vocalist Oliver Ackerman’s shoegaze roots with mastery. What’s left is palatable sensationalism; an endless hum holds as the layers of each track weave in and out of center-stage. On Hologram, APTBS allows tracks to slip seamlessly out of great intensity just as often as they reach it, often outsmarting their audience. 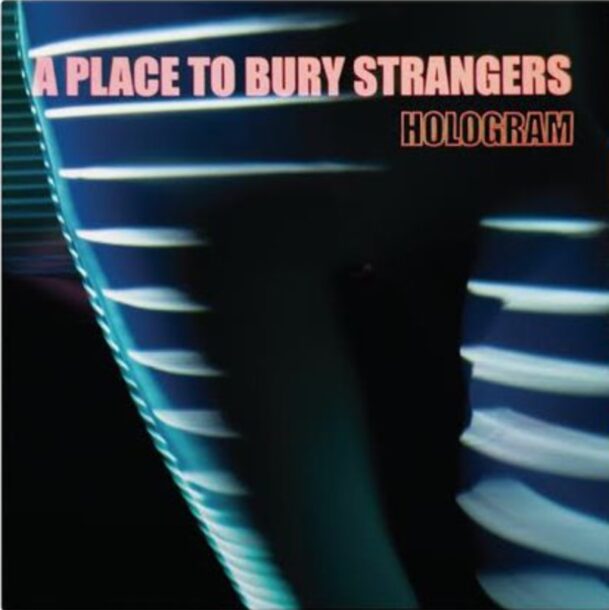 Ackerman’s vocals are cool and watery, and everything else is the opposite. The feeling of each track is about as elusory as a hologram- take the evasive arc of “I Need You” or the, even, dissatisfying cuts on “In My Hive”. “Playing the Part” is an entire track that diverts to a quintessential soft punk take, highlighting the groups ability to embrace a melody and package experimentalism, but also their overarching divisive tendencies.

The lead single, “End of the Night” and it’s accompanying video – both out now – give us a glimpse into the physical projectile of an APTBS track, particularly how fluidly something from the group can both mellow and intensify. More so, how the intimacy of a one-room creative process makes vibrations tangible as they emerge from each mechanical component.

In breaking down the composition of any A Place to Bury Strangers project, you will find the rawness of mechanicalism paired with the psychedelia of machine-made noise. That is to say, APTBS is making machines come to life, pumping them with palpable energy and transfiguring analog severity atop a digitized base- metal for the modern age.

Most important to portraying the charged atmosphere the trio is known for are their live shows which follow the guidelines more for performance art than punk concert. Ackerman and crew have long-touted the way to listen to APTBS music is at a live experience with visual stimulants and similarly entranced peers, which will, hopefully, be a possibility on their upcoming 2022 worldwide tour. If all goes well, we might be able to experience Hologram in its intended, fully sensationalized effect, but, until then, the EP will be available for streaming on July 16.

Listen whenever, with whomever, but, whatever you do, listen as loud as possible.

For more information go to the A Place to Bury Strangers website.

By AVA LIVERSIDGE Metallica and the San Francisco Symphony have more in common than anyone could ever expect, a truth that challenges our understanding of music as a spectrum, with these two groups on either […]

By AVA LIVERSIDGE Creatives are doing what they do best during quarantine: getting creative, and supermodel turned gothic Americana singer-songwriter Karen Elson is no exception. On her new EP Radio Redhead Vol. 1, Elson shares […]

July 30, 2020 News Musicians Comments Off on The Rolling Stones Give Us a Gift with Well-Timed Release of ‘Scarlet’ Featuring Jimmy Page

Review by AVA LIVERSIDGE In 1973, at the height of their established Rock N’ Roll royalty, The Rolling Stones released Goats Head Soup, an album leaving no territory uncharted. The album made expansive contributions to […]