We caught up with Loren Molinare on his way to band rehearsal and if you want the scoop, he is really the guy to go to.  One thing’s for sure: The cat hasn’t got this DoG’s tongue!

Loren, the frontman for the DoGs, guitarist for Little Caesar, family man and a guy with a full time job with Blackstar Amplification, has got a lot going on.

In the last few weeks he’s been to Detroit with his band The DoGs, he’s been to London for his “day job” with Blackstar Amplification and he was even at the Rainbow’ Bar and Grill’s 44th Anniversary Party on the legendary Sunset Strip the other night.

So we asked him for the scoop and got it.

“It’s really fun on the Strip, it was a really good crowd, it was a great time,” Loren said of the Rainbow’s anniversary celebration that went from afternoon through Sunday night. “I went to see Junkyard because I’ve been friends with them since we were label mates on Geffen years ago.”

L.A. Guns, Junkyard, Autograph, Tuff, Circus of Power and others played the Rainbow’s famous parking lot party.  Loren and musician pal Richard Duguay, had a good time, chilled on a hot day among the throngs of at least 700 strong.

“It was great Rock and Roll on a Sunday afternoon,” Loren said. “It was cool, the place was jam packed and for $14 you got two free drinks. What more could you want?”

Loren, who with his other super hot band Little Caesar has released a new live record and is prepping for a promotional tour through Europe, wasn’t the only one who went to see Junkyard as most of the crowd was sporting some type of Junkyard attire.

“What I like about Junkyard is they’ve stayed true to the past but they’re current in their style,” Loren  said.  “A lot of the bands from the Sunset Strip era have not matured.  They still dress like the 1980s. But Junkyard has transcended time, it was a breath of fresh air, they were like ACDC meets Springsteen meets Junkyard. It was really “no frills” Rock N Roll for 2016.

“But regardless of anything from the mid-1980s ’til now, I think it’s great in this age of digital media that there was actually a live event,” Loren said. “It was good to see the crowd’s excitement for Rock N Roll.

A DoG’s Welcome Back in Michigan

Loren returned from London on Friday, where he visited with Blackstar.

But before that, he and The DoGs hit Michigan, starting in Detroit, where he saw a couple of old pals and played some hot gigs. The band got plenty of press and a royal welcome coming back to Detroit.

“Michigan was really great, we did a live, stripped-down DoGs show that was like Woody Guthrie meets The Stooges,” he said. “Me and Mary had battery-operated Blackstars, Tony played a garbage can.”

The band got to spend some time with our favorite Tranny Punker, Jenna Talia, who Loren says has become so polished she and her band Glitter Trash are really ready for the big time.  He said it’s no surprise Glitter Trash is asked to play the big punk festivals like the big shows.

After spending time and getting The DoGs and Glitter Trash together on stage, the punk bands enjoyed some down time and visited at Jenna’s house, the Glitter Palace in Detroit.

“It was just really cool getting to spend some time with our buddies and enjoying the scene,” Loren said. Jenna and Michelle made food for everyone, and Jenna whipped up some hummus or something, and it was very cool.

The DoGs also did a gig at the Mercury Cafe, right down the block from Jack White’s Third Man Records.  The Majestic theatre is a cool complex, with rock and roll bowling and is a big part of the revitalization of the area. The Mercury Cafe holds about 250 people. The DoGs found out as the crowds jammed on in.

To say the crowds found them wherever they went is pretty accurate. After all the hoopla with Glitter Trash, The DoGs went to Lansing and packed Mac’s Bar near the Michigan State campus.

The DoGs plan to go back when their split single comes out to have the release party and just enjoy.

A DoGs’ Documentary in the Works?

The Speed Brothers approached The DoGs to do a documentary on the band.

Loren said: “They came up to me and said, ‘The story must be told,’ and I thought, ‘Oh wow, they think we’re going to die.'”

As The DoGs have gigged with some of the original punks from Detroit, they have indeed got a story to tell.

Apparently they’re going to use footage from the 1970s and interview people the band’s played with in London, Detroit, LA, NY and Tokyo.

The DoGs are also gearing up to shoot another video this summer. The second video release, called “Not Workin for the CIA.” 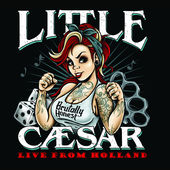 Little Caesar’s new live album, Brutally Honest, is out and available on iTunes.

Regarding Brutally Honest, Loren said: “I listened to the live record on my iPhone and it sounds really good.  We didn’t mess with stuff, it’s ‘Brutally Honest’ and in your face.”

He added: “Never in my dreams did I think we’d have a double live album like Peter Frampton.”

On April 26, Alex Kane makes his debut with the band Little Caesar at the Whisky A Go-Go on the Sunset Strip. “It’s the first time we play live with Alex,” Loren said. “Alex is a real pro and we are super lucky to have him.”

Veteran Band Debuts Tunes at Ultimate Jam Night at Whisky A Go-Go By DONNA BALANCIA For Little Caesar, Honesty is the best policy. The new album, Brutally Honest, is a double live CD recorded while […]

By DONNA BALANCIA – The DoGs, those legendary rockers from Detroit, have released a video “Ain’t Going Nowhere” courtesy of BlankTV.  It’s a funny vid depicting one of our favorite bands. “We wanted to have […]

Video Premiere: The DoGs of Detroit Dig the Beach with New Release ‘Under The Coast’

March 10, 2021 News California Rocker® Comments Off on Video Premiere: The DoGs of Detroit Dig the Beach with New Release ‘Under The Coast’

By JOHN DALY The DoGs have released the ripping new track “Under The Coast,” accompanied by a killer video directed by Frank Meyer blending hot surf action with rebel Rock ‘N’ Roll. “Under The Coast” […]