Bob Dylan’s original handwritten lyrics for “The Times They Are A-Changin” went up for auction with an opening bid price of $2.2 million at Moments in Time online auctioneers.

Listed as the “original working manuscript” the lyrics to “The Times They Are A-Changin’,’’ were written on 5-ring binder paper, which after the many years appears to be only slightly worn and is clearly legible. The world-famous song has been covered by many musicians over five decades, and is the title track to Dylan’s 1964 album. 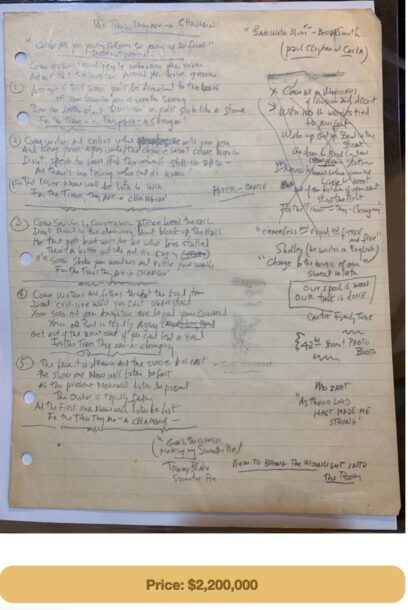 Bob Dylan’s ‘Blowin’ In the Wind’

The auction house also put up for auction Dylan’s handwritten Lyrics for “Blowing In The Wind,” written on hotel stationary in 2011 with a starting price of $150,000. 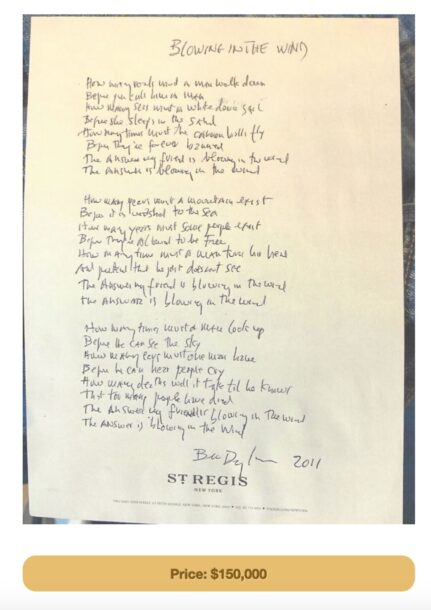 There are many compelling items up for auction on the Moments In Time site, including Tupac Shakur’s bullet-dented crown medallion worn when he was shot in 1994.

By DONNA BALANCIA Bob Dylan, who won the Nobel Prize for literature in 2016, apparently has a lot to say about what’s going on in our world with the new track “Murder Most Foul.” The […]

Busby: ‘One of the Best Events I’ve Ever Attended’ By BOB BUSBY Roger Waters kept his politics in check during weekend 2 of Desert Trip, but did basically tell the crowds that he would still […]

The New Basement Tapes ‘One Night Only’ Concert

November 14, 2014 News Musicians, Reviews Comments Off on The New Basement Tapes ‘One Night Only’ Concert

Johnny Depp and Haim Join ‘Superband’ By DONNA BALANCIA — The New Basement Tapes proved work and friendship can indeed mix, performing a “one and only” show that knocked the socks off a curious LA […]