Few self-respecting rock fans would ever turn down the chance to hear new music from the R.E.M. guitarist, Peter Buck. Similarly, anything fresh from Britpop hero, Luke Haines (Black Box Recorder, The Auteurs) is always worth a listen. These two beloved artists collaborated on a project titled Beat Poetry For Survivalists.

Despite this album’s indisputable marquee credentials, the listener ought to still approach this new work with some degree of caution.

Musically, this release is mostly a lot of fun. Buck, the ever-inventive guitarist, creates wonderfully garage-y rock sound beds throughout. Haines snarls as much as he actually sings these songs and presents himself as quite the authoritative vocal figure. This is possibly the nosiest collection Haines has ever participated in. Furthermore, these songs (mostly) forego the sort of gentle textures oftentimes associated with Buck’s R.E.M. 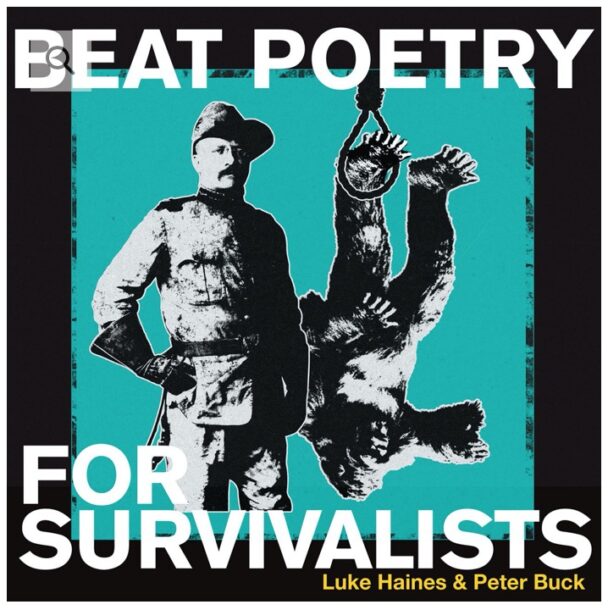 This album’s lyrics, however, represent its most troublesome elements. It sometimes feels like Haines is dropping numerous famous names into these songs, just to show off how much he knows about pop culture. StarKist doesn’t want tuna with good taste; StarKist wants tuna that tastes good. Sorry, Charlie. Sorry Luke, as well.

Yes, it’s admirable how this rock star knows about scientist Jack Parsons, musicians Karen and Richard Carpenter and artist Andy Warhol (who gets his very own song with “Andy Warhol Was Not Kind”), but name-dropping is not equivalent to good songwriting.

With that said, whenever Haines is writing about intriguing subjects, rather than A-list superstars, he’s so much more effective. The album’s best track is one called “Ugly Dude Blues.” Sonically, it’s built around a chunky electric guitar riff and colored by harmonica fills. Although it includes the word ‘blues’ in its title, it’s not actually a blues-styled song. It’s funny, too, as Haines sings the blues for “such an ugly guy.”

“Rock ‘n’ Roll Ambulance,” which closes the album, is also a standout. Buck tamps down the guitars on this one, and Haines sings it most meditatively. It’s all about the Rock ‘n’ Roll lifestyle and has a wonderfully glam-y resemblance to David Bowie’s “Rock ‘n’ Roll Suicide.”

If you’re a big fan of either or both of these talented men, Beat Poetry For Survivalists is a curiosity well worth your time and attention. If you only have a passing interest, just pass.

By JOHN DALY Joseph Arthur and Peter Buck, formerly of R.E.M., have formed the new band Arthur Buck The pair have just finished recording their debut album which will be released by New West Records. […]