How you feel about The 1975’s approach to creating its music may be linked inexorably to your opinions concerning musical schizophrenia because this band’s songs are all over the map. The new album, Notes On a Conditional Form, offers something for a every ear.

For instance, the track “People” is one loud, raging, punk rock blast, comprised of a screaming vocal and electric guitar noise. The very next one, “The End Music for Cars,” is a meditative instrumental worthy of Brian Eno’s patented ambient expressions.

Read more about The 1975 at California Rocker

Then, from an entirely different sonic continent, there’s “I Think There’s Something You Should Know,” which is a full-on dance music banger, complete with vocoder-accented vocals. “Nothing Revealed Everything Denied” is dance of a different variety, as it opens with gospel-y piano and choir vocals. Listening to this album – and the 1975’s music, in general – can oftentimes feel like surveying the wide musical universe — but at warp speed.

Don’t, however, allow all of this artistic flightiness to prevent you from recognizing the undeniable sincerity at the heart of 1975’s music. “The Birthday Party,” for example, is one of those beautiful aural scene-setters that takes the listener to a special, dreamy place. Vocalist/songwriter Matthew Healy speaks candidly about attending a party, complete with all its temptations to overindulge (both physically and sexually). The song’s rhythm is taken at a deliberate pace, as though Healy is thinking through his various behavioral options as he’s singing it. This one also sounds – dare we say it? – kinda country.

The 1975 is a pretty big deal in its home country, England, which has a musical culture far more eclectic than the many times more sonically segregated United States.

Past popular British groups, like New Order and The Stone Roses, could be categorized as either dance or rock acts, depending upon how you looked at them. These distinctions probably matter more to Americans, than they do to the Brits. They don’t have any problem with someone wanting to bust a move one minute, then show off air guitar skills the next.

If you’re lacking listener patience, The 1975’s music can feel like being on a date with somebody who is way overthinking a restaurant menu. “Can’t you just make up your mind?”

To artists like The 1975, though, absolutely everything looks tasty. Why not try it all? Even though all this jukebox jet setting may leave you feeling more than a little jetlagged after traversing these 22 highly diverse tracks, you’ll return home with newfound respect for The 1975, if not feeling entirely warm and fuzzy from time spent within your pre-established comfort zone. 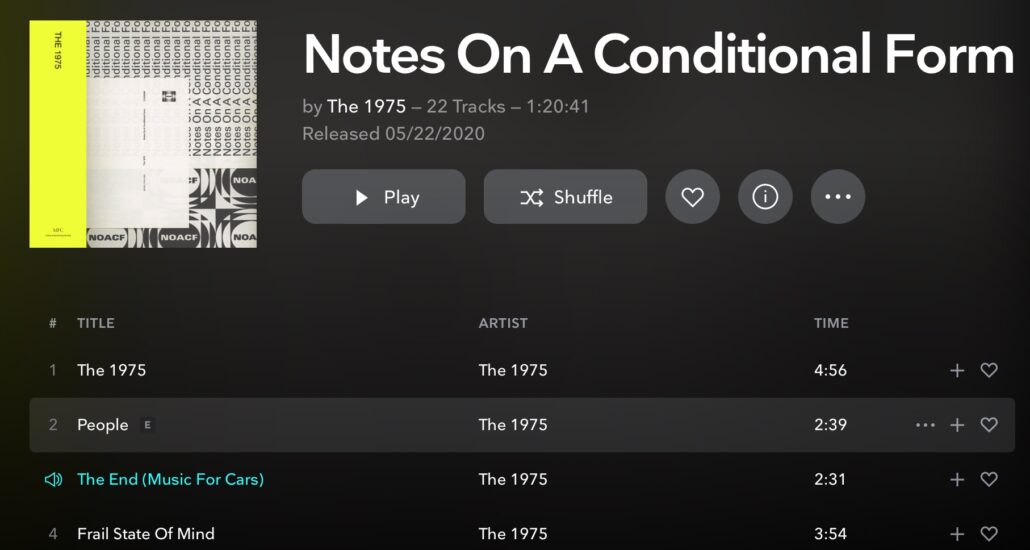 September 23, 2019 News concerts, The Latest, Video Comments Off on The 1975 Performs ‘It’s Not Living’ at Reading + Leeds – Interview and Video

By CRAIG HAMMONS Thievery Corporation brought their hypnotic grooves, intricate rhythms and mystical funk to the Santa Barbara Bowl on this cool summer evening.  This is the 20-year anniversary of a band that continues to […]