They always tell artists of every calling that the most important thing you can do is find your own voice. Find what sets you apart. What makes you unique. This has never been an issue for Courtney Barnett, though. She literally has a voice like no other. She sings with a conversational style that cannot hide her Australian origins. We love her most of all because she’s a straight talker. It’s as though there’s an unspoken introduction to every one of her songs that goes, “Can I be blunt here?” She doesn’t ask, though, she just comes right out and says it because tact is for weenies.

Barnett’s Things Take Time, Take Time is filled with lyrical references to writing letters, awaiting phone calls, and just generally needing to communicate. This makes sense, as the pandemic has separated loved ones with more brute force than a guarded Berlin Wall. A virus isn’t like a national barrier, though. You can’t shout, “Mr. Gorbachev, tear down this wall!” loud enough and long enough to reunite loved ones again. As the album title, says it, Things Take Time, Take Time. And time takes patience.

While Barnett is never hesitant to talk tough, she also has a pretty, gentle side that is underrated. This hidden personality trait comes through on “If I Don’t Hear From You.” She sings it sweetly over jangly electric guitar, while backed by some lovely vocal harmonies. “Turning Green” is another album standout. It opens with drum machine percussion, but it doesn’t turn into a synth pop recording (even though it includes some that genre’s more recognizable elements). 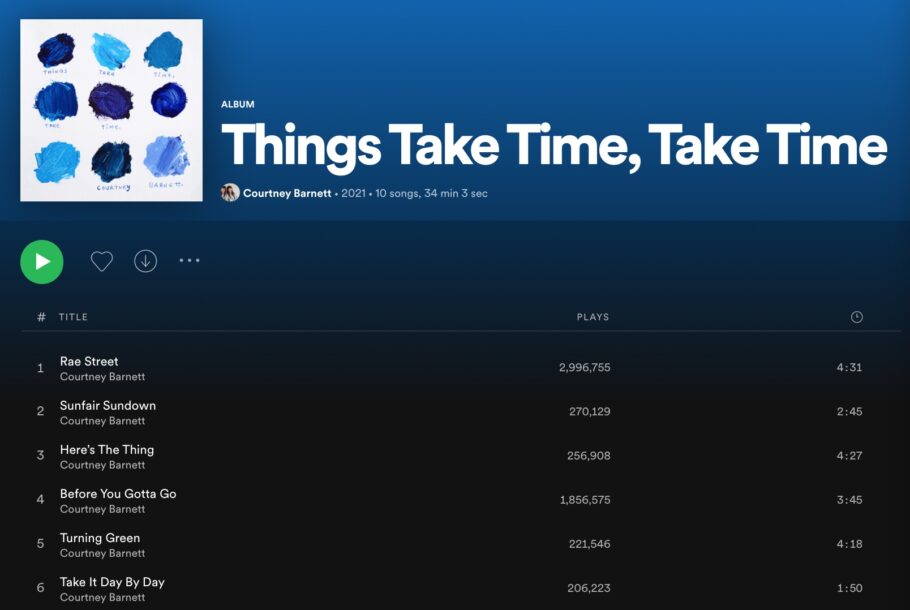 Producer Stella Mozgawa (of Warpaint) and Barnett play all the instruments on the album, and Barnett lays down some beautifully nasty electric guitar lines on “Turning Green.” It’s so good to hear her just let loose with it. She sounds pent up on much of this album, so this track gives her ample opportunity to blow off a little emotional steam.

The album closes with “Oh The Night,” which kicks off with real drums and piano. It finds Barnett fighting with her mind, which constantly plays tricks on her. “Oh, the night goes so slowly/Any time I get low/And I don’t really need reminding/I know it’s only in my mind.”

Like the rest of us, Courtney Barnett has been living in her own mind for far too long. And like the rest of us, she needs to get away from herself and with other people – in person! Although the waiting is the hardest part, the waiting is almost over. This album is so relatable because it’s everybody’s album. Let’s hope the days of writing letters, placing phone calls and engaging in Zoom meetings are numbered. Courtney Barnett needs some human touch. As do we all.

Dan MacIntosh is a music reviewer for U.S. Rocker. Check out his work here.

Living Colour Brings Energy and Alternative Funk to the HOB By DONNA BALANCIA — Living Colour packed the House of Blues Anaheim with their funky, punk-influenced music and wild performance, a hint of what to […]