By DONNA BALANCIA – Richie Ramone will play a New Year’s Eve show that kicks off a new album and a European tour in 2016.

Ramone, who played with the legendary group in the 1980s, has a new album, tentatively called “Cellophane,” which will feature nine new, unrecorded songs. 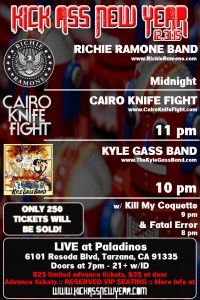 He’s written songs for the Ramones, probably the most well-known of which is “Somebody Put Something in my Drink.”

Europe has been a welcoming region for Ramone, who with Clare Misstake, Alex Kane and Ben Reagan, have nine upcoming stops in the U.K., a few Ireland shows and then hit Germany, Italy and Holland.  They’ll be back in the USA in the spring.

“You know, it’s half and half how we travel,” Ramone said. “We’ll take the plane, use the van. Touring is what we live and breathe.”

The reception to anything Ramones is huge overseas and over the years, Richie has built a reputation here in the US as well.

“The Ramones have devoted fans and I’m a piece of that,” Ramone says.

“And it’s always great that the people come out to the shows.  After the show, I talk to people and I’ve heard more than once —  or more than 10 times really — ‘I didn’t know what to expect.’  They get a good show and then they come back.”

Ramone is recording new material for the album now.

“This album is great I loved my first record, but on this is the bar is raised, I really love this record.  a lot of fast stuff.  I didn’t re-do any of the old songs.  The first record I did four or five songs from before. But these are all new songs – they’re still being written.  They’ve been around less than a year.”

Richie’s using his faithful band on the record. Clare has been with Richie three years and Alex has been with the group for two years.

“I’m using the band on the record,” Richie said. “They’ve been with me a while now.”

Some song titles include “Just To Be Clear,” “Cellophane” and “I Fixed This.”

“We were touring Sweden that’s what they would say,” Ramone said. “If I say ‘I’d like a cheeseburger,’ they’d say ‘I fixed this.’  Funny things happen like that, and  I always put my personal experiences into my music.”

‘The fans lift me up and give me energy’

“They used to say June Carter Cash would say, ‘Ok honey let’s go make some history,’   and when I heard that I always remembered it,” Ramone said.  “It’s amazing. Music lives forever, until the end of time there will be a copy somewhere.  I’ll see a single with my old band for hundreds of dollars, a little 45.  The stuff lives forever.”

As for the what’s coming up?

Creator of Surf Music, Dick Dale Still has Many Waves to Ride By DONNA BALANCIA – Surf Guitar legend Dick Dale says his purpose is to inspire. Dale, who is drawing more crowds than ever […]

Queen Mary Events Park Hosts Sonics, Kennedys, The Two Tens By DONNA BALANCIA – The first annual Hi-Fi Rockfest was an interesting mix with everyone from Luicidal showing its Southern California muscle and The Two Tens […]

By DONNA BALANCIA – It was a great weekend in California for the punks. Cheetah Chrome and The Streetwalkin’ Cheetahs hit San Francisco; Richie Ramone, The Sonics and The Dead Kennedys rocked The Queen Mary […]