The Hollywood Vampires Bring Rock ‘N’ Roll to the World

PHOTOS AND STORY
By SUZANNE ALLISON

HOLLYWOOD – Touring with The Hollywood Vampires — those legendary rockers Alice Cooper, Joe Perry and their pal Johnny Depp — is much more than merely playing concerts.

The tour gives people in Europe and the U.S. a chance to see musicians from an era that, like the vampire itself, is pure legend.

One would think all those egos couldn’t fit inside any of their many tour buses that hit the highways.

In reality, while like any vampire, these guys live for the night, they actually each have a down-to-earth persona when in their group travelling from city to city.  They’re professionals on a mission, devoted to each other and to their fans.

The Hollywood Vampires just wrapped up a European tour and now it’s on with the U.S. tour, to bring the famous rock show to people living in upstate New York to the West and everywhere in between.

Music is a very personal experience for the fans and they love to see Alice, whose Billion Dollar Babies and School’s Out were among the top albums of all time.  It’s an opportunity for fans to see musicians who are not only legendary but brought a new type of Rock ‘N’ Roll to the world.

“I’ve always wanted to see Alice Cooper and I’ll finally have the chance.”

From Guest to Collaborator

Across Europe fans clamored around The Hollywood Vampires, hanging over the rail to hand them something to sign, to touch them, or just catch a glimpse of the rock idols.

The Hollywood Vampires came to know each other when Alice worked with Joe and Johnny. Alice had guest musicians on a record and the guys went from guest artists to collaborators. That’s usually the way it works, of course, but this is a supergroup of very large proportions.

Johnny Depp and The Kids

Johnny brings movie star fame to the show, but he started out in music before nailing the life-changing role on the 1980s TV hit show 21 Jump Street.

He’s built a successful film career that includes the “Pirates of The Carribbean” films. But Johnny’s first love was always music.

He was in a band called The Kids with fellow Vampire, Bruce Witkin.  I know because I was there — as Johnny’s friend and I ended up marrying Bruce.

The Hollywood Vampires released the self-titled album and toured to promote it. The fans love the album and that’s something that makes the guys happy.

But for the guys it’s really about the fans. It’s amazing to see the reaction of the fans across the country when they see Alice Cooper or Joe Perry.

We take it for granted because we live in Los Angeles and we get to see the big names. But The Hollywood Vampires played county fairs and smaller venues where they brought the music to the masses. The fans are so excited to see these cherished Rock N Rollers in person because their music means so much to so many.

It’s music from an era that may or may not endure with the advent of EDM and computer generated sound dominating music creation today. What the Hollywood Vampires bring is a glimpse into the workings of the the guys who are the cornerstone of rock music.

Hangin’ With the Vampires

And the Hollywood Vampires enjoy the interaction with the fans. They prefer playing the smaller venues — the smaller the better and that’s because it’s more intimate and they like the more personal performances.

With all these guys who have such a dynamic background and type A personalities when it comes to music, they all admire each other and it’s pretty rare.

That’s not to say each of The Hollywood Vampires don’t have their own individual quirks.

Alice Cooper is a an admitted junk-food lover and his favorite candy is Red Vines.  When he’s on his own tour, his wife and daughter are almost always with him and he tries to get in a few rounds of golf where he can.

Meanwhile, Joe would never touch a Red Vine – he’s the opposite – he’s health conscious about what he eats,  and he’s an avid sun worshipper. He brought along his wife Billie and they adore their pup, Bella. Joe takes such good care of himself.  He has a daily regimen, he watches his weight and he watches what he eats. 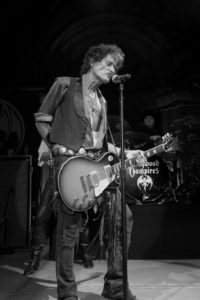 Johnny loves to read and practice guitar. Bruce is the musical director always trying to improve the show.

Tommy Henriksen is the one who makes everyone laugh, keeping the good feelings going, and Robert Deleo has some impressive dance moves. Matt Sorum, the drummer, was planning to bring his French Bulldog with him on the U.S. portion of the world tour, I know he spends lots of time with her.

But as much as these guys enjoy each other, they really love their audiences.

And to some people it may seem like this rag-tag band of ritzy rock stars are on the road to get their last licks, but that’s exactly why the tour is so important.

Representing An Era in Music

The Hollywood Vampires tour represents a rare opportunity to see our popular culture in action.  These musicians are treasured and they are loved by the fans overseas as well as in here in the U.S., where the music started.  It’s gratifying for the band.

The Hollywood Vampires bring these valuable musicians and their music out to a younger generation. The young people, so inundated with electronic music and digital production need to see and appreciate music made by the masters.

By DONNA BALANCIA Alice Cooper was the guest on Jonesy’s Jukebox and recalled the first time his band played under the name Alice Cooper, at The Cheetah Club in Venice, California, and they cleared the […]

November 2, 2016 News Live Reviews, Reviews Comments Off on Legendary Alice Cooper Goes from Kid’s Playhouse to Fantasy Springs and Still has Time for His Golf Game

Review of Alice Cooper at Fantasy Springs Resort Casino By CRAIG HAMMONS The first time I saw Alice Cooper was in the gymnasium of Cal State Fullerton in 1969. He was on the bill with […]