STAFF REPORT
The alternative musical group The Jesus and Mary Chain filed a copyright infringement suit against Warner Music Group based upon the refusal of WMG to allow JAMC to terminate grants of copyright interests 35 years after the initial release of the bands albums, including the 1985 release Psychocandy.
The suit seeks, among other relief, statutory damages for willful copyright infringement in the amount of $2.55 million.
The Jesus and Mary Chain, comprised of Jim Reid and William Reid, formed in 1983 near Glasgow, Scotland, and quickly rose to prominence and massive critical acclaim in 1984 and 1985 with the release of the singles “Upside Down,” “Never Understand,” and “Just Like Honey,” and the release of their debut album Psychocandy. The band went on to release further successful recordings, such as “April Skies,” “Head On,” and “Happy When It Rains.”
Under § 203 of the Copyright Act, enacted in 1976 and commonly known as the “35-year law,” recording artists have the right to terminate old grants of rights to record labels, generally, 35 years after the release of those works.
In drafting the law, Congress intended that songwriters and recording artists must have a “second chance” to own the U.S.  rights in and to their works. This law has been utilized by many recording artists and represents a major legal issue in the music industry, generating a substantial amount of litigation. There are currently two class action suits pending in federal court in the Southern District of New York, against Sony and UMG, respectively, regarding Notices of Termination that several hundred recording artists have sent to those companies.
“Our copyright law provides recording artists and songwriters with a valuable, once-in-a-lifetime chance to terminate old deals and regain their creative works after 35 years,” said JAMC’s lawyer Evan S. Cohen. “This ‘second chance’ has always been a part of our copyright law. In this case against WMG, the label has refused to acknowledge the validity of any of the Notices of Termination served by The Jesus and Mary Chain, and has completely disregarded band’s ownership rights.
“Despite the law returning the US rights to the band, WMG is continuing to exploit those recordings and thereby willfully infringing upon our clients’ copyrights,” Cohen said. “This behavior must stop. The legal issues in this suit are of paramount importance to the music industry.”
The Jesus and Mary Chain: 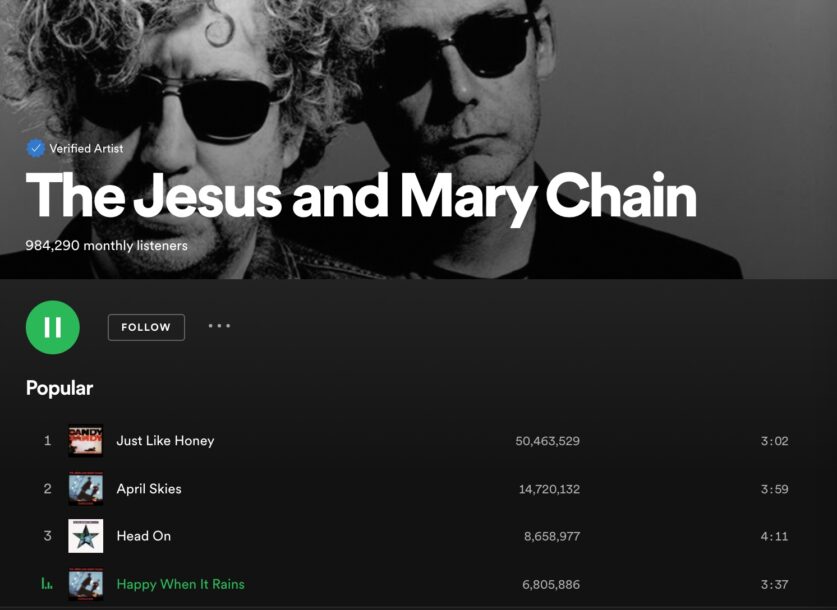