Revolushn has a unique approach to making music. The band blends hot electronic sounds with funk and a some old school style Rock N Roll.  Revolushn is known for its dynamic sound and futuristic and innovative videos, often portraying the world in the future — as well as other worlds. The band, fronted by fearless leader NO, will hit Molly Malone’s on Feb. 15 and Blacklight District on Feb. 16. Donna Balancia of CaliforniaRocker.com sat down with NO to get answers to the important questions.

CR: What do you think of the current pop music?

NO: Current Pop music as compared to old pop? I think it is way better. Better production, better songs, better marketing, etc. etc. Probably the standard themes of pop music are the same as they have been since the dark ages. Teenage love and angst, partying and the he/she done me wrong stuff. And the fact that Rap is now Pop has changed things lyrically in a good way. Overall I think pop music and music in general is moving forward. I guess I am more into Indie stuff than pop. There are local bands in San Francisco (and probably everywhere) that are really, really great. I follow them more than what is considered pop. 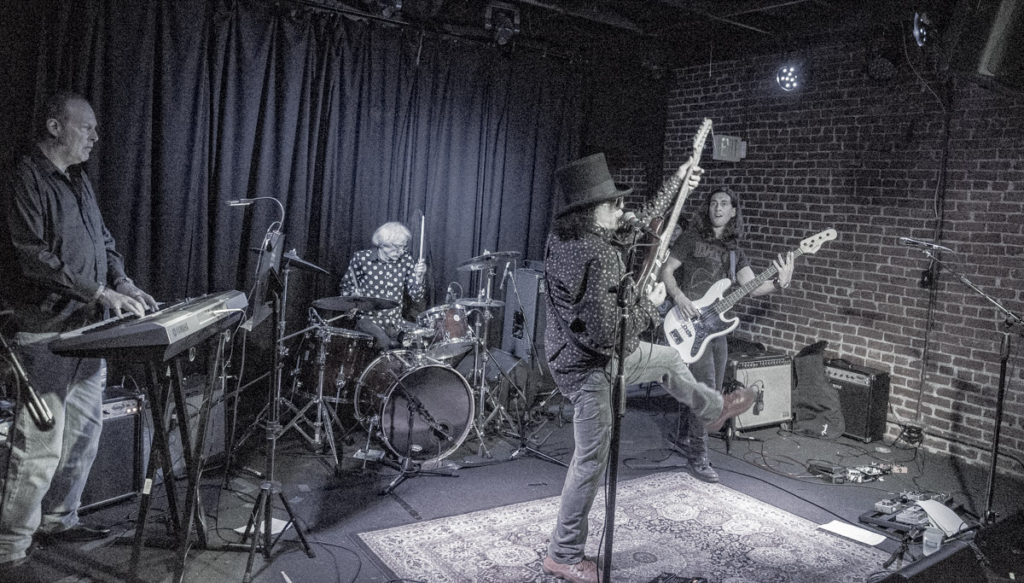 CR: How has the ability to make a hit in your bedroom affected you?

NO: In a HUGE way. All of Further!! was recorded at our home studio. Our producer mixed and mastered at a pro studio but we never would have been able to afford to spend the time getting it right in an expensive studio. So there have been thousands of really great bands that can put out a record now that couldn’t have before. On the other hand, it has flooded the market with shitty recordings and shitty songs. Not all for sure but to have an album out now doesn’t mean what it used to. There was more of a filter back in the day. The record companies sucked but at least they made sure the instruments were in tune.

NO: Controlled panic with loud face noise. I don’t know, we are defiantly a rock band and lots of people call us a Psych Rock band so I suppose we can go with that. We write and record a lot so there are tons of songs that don’t make it on the albums that range from funk to country to trance. But lets say Revolushn is a Psych Rock band.

CR: How did you meet your producers?

NO: So far Revolushn has only worked with one producer, Aaron Connor. He has worked with lots of different styles and groups, from Bone Thugs and Harmony to Belinda Carlisle to Ed Sheered to Revolushn. Anyway, he works at a studio in Kansas City (Cypher Sound) that a friend owns and the friend introduced us and we hit it off right away. He is a musical and aural wiz kid. 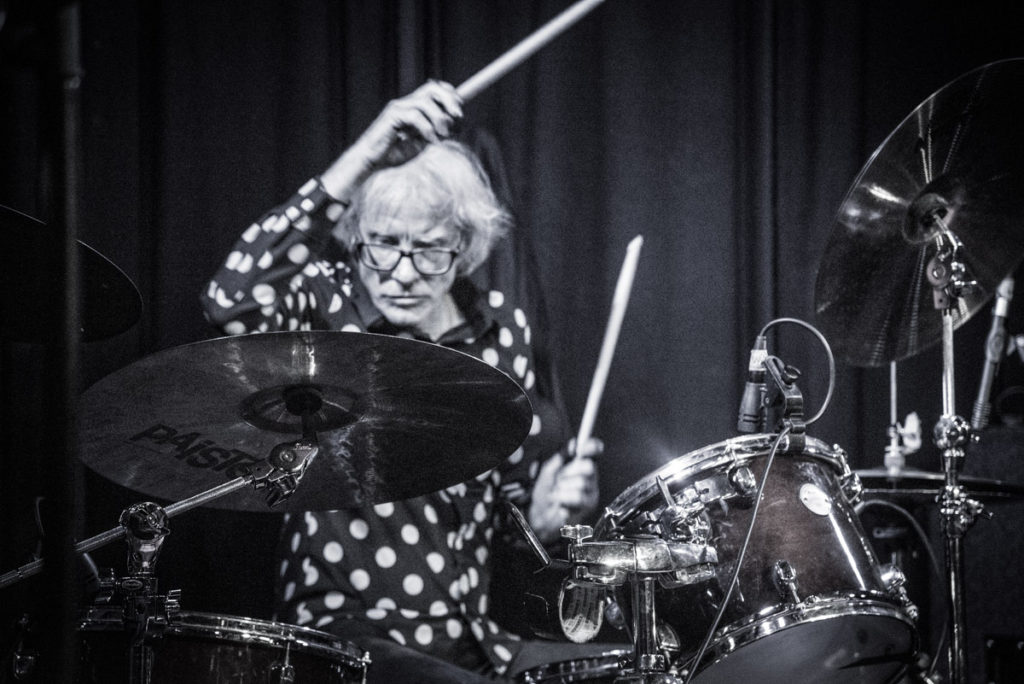 CR: What would you do differently if you did it all over again?

NO: Be born Paul McCartney! But that is kind of a trick question. Change one thing on our path and everything that follows changes. I love our musical path now and it wouldn’t be what it is now if things were different in the past. If I had it to do over again I suppose I would not have smacked Ted Nugent in the nose when my high school band was backing him up. Got us kicked off our first tour. Yea, in hindsight I should have kicked him in the balls too!

CR: How did the band come to learn the songs?

NO: After the songs are about 75 percent written we start jamming the parts till they click. Then we work on buttoning up the arrangements. Sometimes that is it. Sometimes we tighten them up after playing them live a couple of times. I have a problem in that I am constantly re-writing them all the time, even while we are playing them live. Most of my mistakes live are because of that. 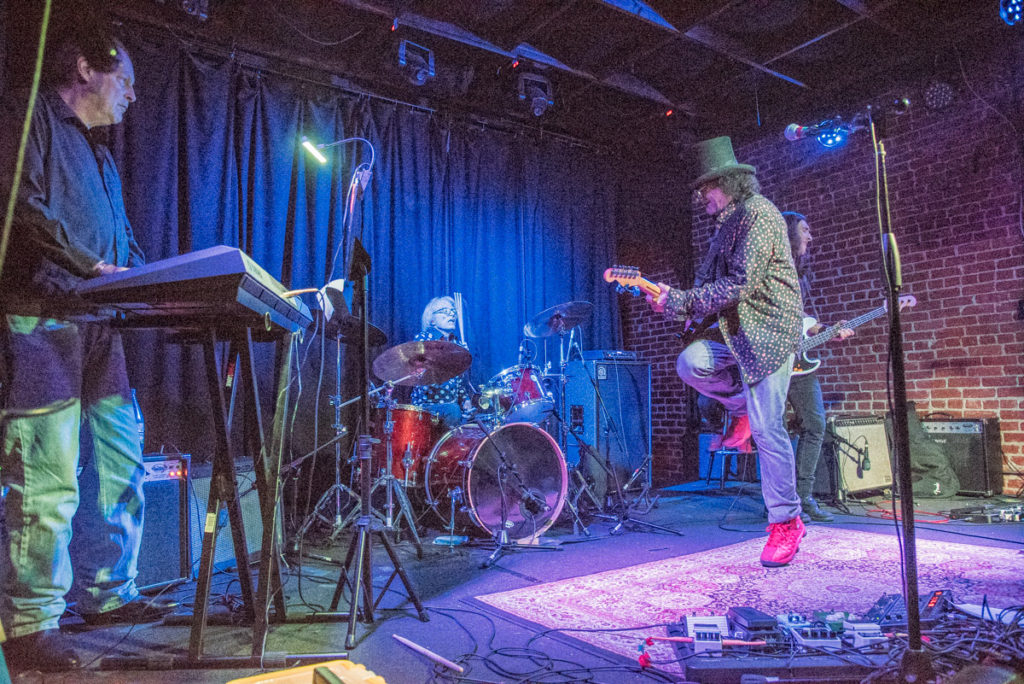 CR: What is the songwriting process?

NO: It starts with a spark of a lyric idea or a riff or beat. David Kendrick and I write the lyrics. So once we have the riff or lyric we get together and work it out on drums and guitar. Sometimes when I write I go into the studio, find a beat I like and just hit record to see what will happen. That way is not always productive but sometimes yields some very interesting music. A lot of our melodies are written that way.

For more information or to check out Revolushn go their website here. For tickets go to Molly Malone’s and Blacklight District.

‘The Freshman,’ A Bizarre, Martian-Themed Album by the 12-Member Band Revolushn, Worth A Probe

July 17, 2016 News Musicians, Reviews Comments Off on ‘The Freshman,’ A Bizarre, Martian-Themed Album by the 12-Member Band Revolushn, Worth A Probe

By DONNA BALANCIA – Revolushn doesn’t need to have permanent band members — because like on Mars, everything is transient.  And that includes the music. Led by a couple of guys with some weirdo nicknames […]

New Band By Bob Thiele and Pals Gets Attention By DONNA BALANCIA – Living in Los Angeles the quality of cover bands is out of this world. A great example of that is the latest […]