With support from Camp Trash and Rat Tally, Future Teens will embark on a fall U.S. tour through much of the Midwest and East Coast beginning on October 13 in Brooklyn, NY, and a hometown stop in Boston on October 16. Tickets are on sale now via linktr.ee/futureteensusa.

“Team Sports” gracefully encapsulates the album’s message, as the heavier track concludes with “We’re all just looking for a safe place to spiral / Why not make a team sport out of survival?” It embodies the process of asking for help–from the moment one realizes they need it, to the self-doubt, fear and hesitation, to perhaps the occasional sudden change in appearance, to the value of leaning on friends and getting professional help. There’s a renewed understanding of what it means to ask for help, one that clearly displays the growth of the band both musically and as people in their own lives. 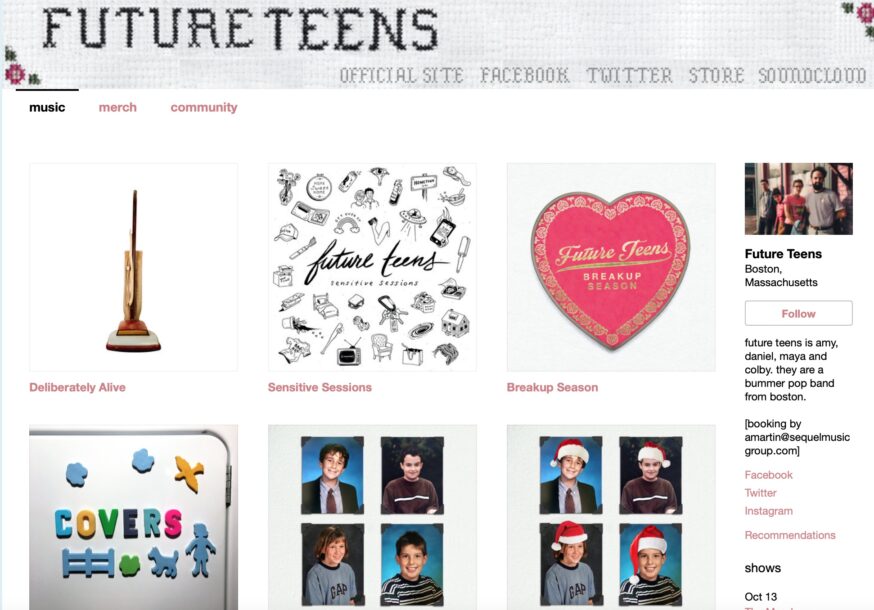 “The first time I bleached my hair, a surprising number of people asked if I was doing okay,”  vocalist and guitarist Amy Hoffman said. “I know they were just razzing me, but it struck me as such an absurd barometer for wellness, like, no! I’m not okay, but that’s not why I’m blonde now!”

Hoffman admits seeking help is consistently difficult, but always worth it. “I think it’ll always be challenging to ask for help, or to be honest when my best friend gently checks in about the motivation for my latest self haircut, but I’m grateful I’m not always white knuckling it until my next therapy session anymore.”

An extra push from producer Andy D. Park (Death Cab for Cutie, Pedro the Lion, Now Now) and The Wonder Years’ Dan Campbell brought the song to where it is now and ultimately became a momentous point in the recording process.

“That last chorus was originally a wordless, rock out ending, but Andy felt like there was something missing,” Hoffman said. “Dan happened to visit us as we were working through it and was kind enough to sing on that section. All of our jaws hit the floor as soon as he started, it was such a memorable part of recording the album.”