In her latest record, Jubilee, Japanese Breakfast (a.k.a. Michelle Zauner) ditches her wistful protocol and embraces a new, daunting challenge: Joy. On the record opener, “Paprika”, Zauner makes it clear she’s ready to emote. While simultaneously summarizing the very foundation of any musician’s desires, she conveys her new openness: “Projecting your visions to strangers who feel it.” After priming her audience for a personally unprecedented exploration, Zauner presents us with a maximalist dream pop record, bubblegum pop for the surrealist.

The ten tracks range from being poignantly class conscious (“Kokomo, IN”, “Savage Good Boy”) to indulgently saccharine (“Be Sweet,” “Slide Tackle”), but they all coalesce into a dissertation on how we face joy and the lengths we’ll go to preserve it. In Zauner’s efforts to set this upbeat tone, she overwhelms her instrumentals with driving 80’s synthesizer and cheery pop melodies. She makes a blatant plea for positivity in the ceremonious victory horns that ring at various points throughout the record. It seems as though the over-the-top instrumentals – the peppy percussion, victory horns, and dance synth – are proof of joy being a challenge to Zauner, something that must be overtly forced at times.

Despite the occasionally abrasive dance-pop instrumental, there is no lack of emotional maturity on the record. Zauner uses her storytelling capabilities to soften the blow of her optimist agenda, making what would feel ingenious more palatable. Her tracks are honest and, despite her change in tone from her last two grievous records, there’s plenty of yearning to go around on Jubilee. The caustic fuzztones on “Sit” subvert melancholic norms, but it’s still a song of longing, as is “Posing for Cars.”

Just as melancholia isn’t completely avoided, neither is bitterness. On the single “Savage Good Boy”, Zauner is scornful of the extent to which greed monopolizes joy, particularly by the uber-rich. It is in her reflections about the differences in how we may experience this universal feeling that Jubilee becomes nuanced and of import. She avoids what could’ve easily been a beautifully-arranged, but emotionally vapid pop record by teaching her audience something about an emotion that is often written off, in the music world and beyond, as easy and shallow.

Track five and ten, at the midpoint and end of Jubilee, are a titular duo: “Posing in Bondage” and “Posing for Cars.” It is apt that something so inextricable from the human experience and projection of joy, posture, becomes a motif in the record. Zauner already suggests that this joy is often performative with the record’s forceful, sweeping instrumentals, but the message becomes more explicit on these tracks. The former is a track about desire for others to feel the same pain that you do and the joy that may be derived in that community, and the latter chronicles the toils of forcing an identity, but both see artifice as a means to achieve. It may take some feigning of identity or plasticky, grandiose instrumentalism to hide behind, but Jubilee is proof that joy is alive and around us, even in the unexpected alcoves of existence. 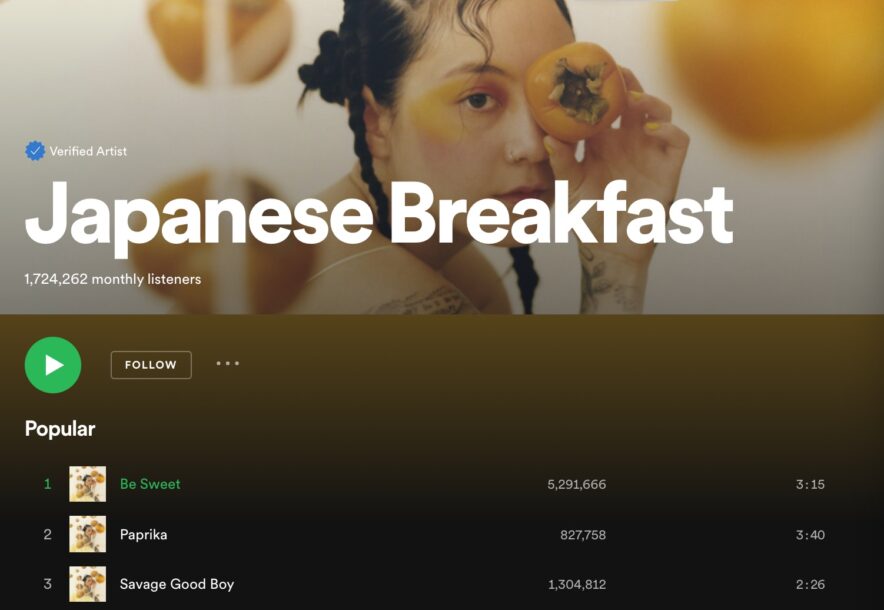