Iggy Pop has released a modern version of the Sly and the Family Stone classic “Family Affair,” just in time for his 73rd birthday.

Pop, whose musical taste runs the gamut and who can be heard on Fridays on his BBC 6 radio show, most recently released the album Free.

Pop said the track “Family Affair” had been keeping him company during the Coronavirus lockdown, adding: “I hoped I could put it out and it would be good company for someone else too.” His birthday was April 21.

The latest track is a cool and funky groove that takes the hit 1971 song to a new level, but still respects the original appeal of Sly Stone’s heartfelt presentation. Pop’s woozy crooner vocals and calypso beat give the track a new life and it’s exactly the remedy for the Covid-weary listening public. Bootsy Collins plays bass on the track. 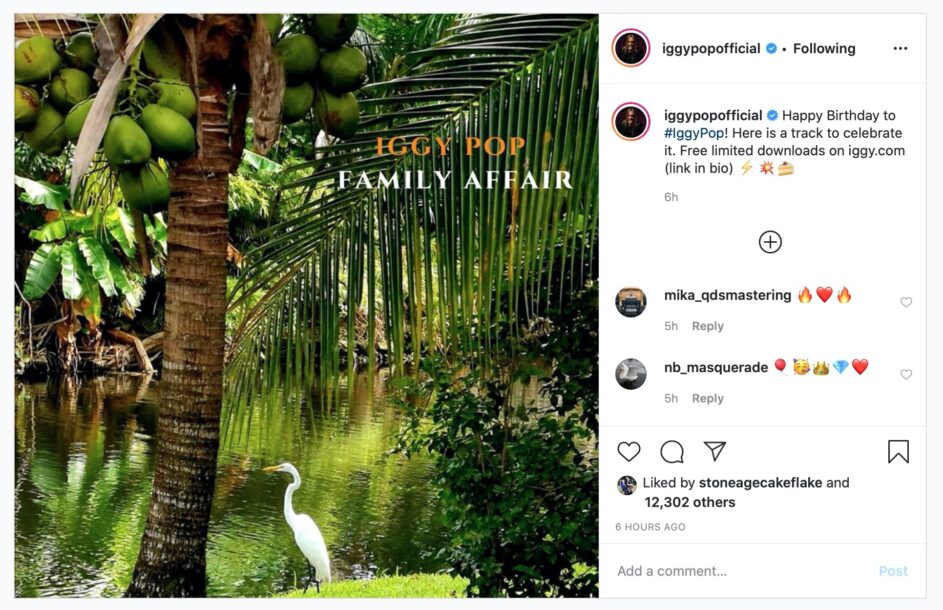 Review: Iggy Pop and ‘The Stooges Live at Goose Lake’ a Gem, Scratches and All

August 21, 2020 News Musicians, Reviews Comments Off on Review: Iggy Pop and ‘The Stooges Live at Goose Lake’ a Gem, Scratches and All

By DAN MACINTOSH With Live at Goose Lake: August 8th 1970, Third Man Record has released the final performance by the original Stooges. It’s perfectly appropriate to make this live performance of the Funhouse album […]

Sideman and Collaborator to David Bowie, Iggy Pop and Morrissey Goes Solo By DONNA BALANCIA Kevin Armstrong isn’t a household name, but he’s probably in your house. With his new solo album, Run, the sideman […]

Post Pop Depression Draws Raves VIDEO By DONNA BALANCIA Josh Homme, Steve Jones and director Andreas Neumann were on hand for a post-screening Q and A at the LA premiere of American Valhalla, the documentary […]