Gary Calamar is a multi-tasking musician. He’s a popular DJ on KCRW, and by day he’s a GRAMMY-nominated music supervisor on successful film and TV projects.

Gary also hosts the monthly Mimosa Music Series at the Federal Bar in North Hollywood. But through it all, he keeps on writing.

From Yonkers to LA

Gary just released two singles, one called “Little Tokyo,” and on the flip side “The Prince of Pico Boulevard.”  They’re fun and they capture the subjects lovingly.

“My daughter, Zoe, has been asking me to check out Little Tokyo,” Calamar told CaliforniaRocker.com. “I’m a fan of Little Tokyo through her.”

Gary’s originally from Yonkers, N.Y., but over the years has come to adopt Los Angeles as home. It’s where he settled with his family, and his surroundings and his family are the inspiration for his work. 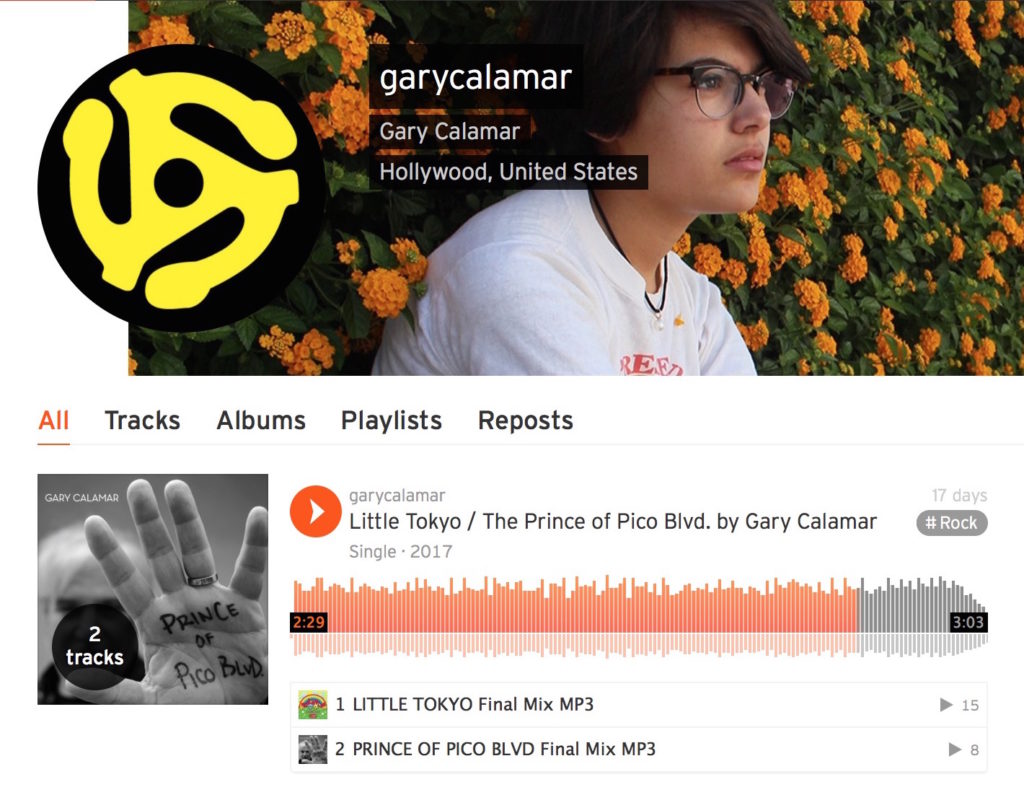 The low-key, white-haired but youthful music enthusiast is smart enough to know that even at his stage of the game — with five GRAMMY nominations under his belt and a great career in music — he can’t quit his day job.  And as music supervisor on some of the most interesting TV shows and productions, who would want to?

Gary is president of Go Music and he has received five Grammy nominations as producer and music supervisor for his work on HBO’s Six Feet Under and True Blood. He’s overseeing Man In The High Castle, Wayward Pines and Good Girls Revolt right now.

It was his work on True Blood that convinced him he’s heading in the direction with songwriting.

“I was working with Bethany Cosentino and Iggy Pop on a song called ‘Let’s Boot and Rally’ for True Blood and Iggy told me I should continue on with songwriting,” Calamar recalled. “So I’m going to continue on.”

A few years later, his 15-year-old daughter picked up where Iggy left off and had repeatedly expressed to Gary her deep desire to visit Little Tokyo.

“We finally got around to going to Little Tokyo,” Gary said. “Just everything in Little Tokyo is fun. It’s really colorful and and everybody was really nice. The costumes I saw in the stores and the Japanese pop music, there’s enough to write a song about.”

The result is an upbeat pop song about the two of them “hopping on the Kawasaki” and going to a vibrant part of town.

Gary: The Prince of Pico

As for his song “Prince of Pico Boulevard,” Gary said he was inspired to write the song by some of the great personalities of the day.

“I grew up in the time when there were a lot of cool DJ names, like in New York we had Cousin Brucie, and KCRW is on Pico Boulevard, so I came up with this fun mock title for myself, which I never used on the radio. But it sort of evolved from there. I used my imagination. And if you listen to the song, you can tell it’s inspired by Lou Reed and Velvet Underground.”

It’s Gary’s love for Los Angeles got him going in his recent direction, along with some prodding by his daughter.

‘Perfect Version of Me’

“It’s a double-A side single,” Calamar said. “I wanted to do songs about Los Angeles. The “Little Tokyo” song is a true story, about my daughter, Zoe, who’s 15. She wanted to go to Little Tokyo and I got inspired.”

The songs are produced by John Would, who Calamar says has a great studio in Echo Park. He’s a multi-instrumentalist and he’s Calamar’s producer.

“Instrumentally, he’s a great musician,” Gary said. “So as we’re going he might try a guitar riff that we’ll use. He produces, mixes and engineers.”

The “Prince of Pico” moniker is more about Gary’s goals from childhood than his adulthood at the radio station and behind the controls.

“It’s about a perfect version of me,” he said.

Gary is no stranger to recording. He released an EP prior to this, called You Are What You Listen To, a six-song collection produced by Would. His songs are catchy and he blends irony with wit and makes it appealing and not preachy. One of our earlier favorites is “Looking For a Job.”

Gary’s monthly Mimosa Music Series brings in musicians — some well-known and others not as well-known — to do what everyone likes best: Play music.

“We used to do them out of my house. We’ve had Donavan, Roseanne Cash, John Doe, John Hyatt, and it just got too big for the house. We moved it to the Federal Bar.”  The next Mimosa Music get together is next week.

Check out Gary’s music on iTunes

Gary said he’s inspired by those who have stuck with it.

Gary said in the music business, dedication pays off.

“It’s not easy today,” he said. “Follow your muse and your dreams and do what satisfies you, and hopefully you will make it pay off. Have a backup plan and continue to write.”

Featured Photo By DEBI DEL GRANDE SAN BERNARDINO – In one giant sweeping night of Rock ‘N’ Roll, Cal Jam 17 featuring the Foo Fighters proved that concerts and festivals will continue to thrive. The […]

By DONNA BALANCIA Ty Segall rocked the first of three sold-out shows at Teragram Ballroom in downtown L.A. promoting his album Freedom’s Goblin. Some special recording people were on hand indicating the California rocker may […]

Read The Interview By DONNA BALANCIA John Dunsworth, who portrayed the beloved booze-swigging gatekeeper, Mr. Lahey, on the Canadian TV show, “Trailer Park Boys,” has passed away following a short illness. His daughter made the announcement […]