UB40 has just rereleased its debut album, which is ironically titled Signing Off.  It’s ironic because when Signing Off was originally released in 1980, this was the sound of a new band just signing on.

The reissued album once again features as its cover art a blown-up picture of a British unemployment form, which is – of course – called a UB40. The music sounds just as fresh today, as it did back when it was first released during the pre-CD, pre-MP3, pre-streaming era.

This newly issued LP comes with two discs. One includes the original side one and side two tracks, while the second is a 45 RPM 12-inch EP, with “Madam Medusa” at 12:52 on side one, and “Strange Fruit” and “Reefer Madness” on side two. Both discs come in beautiful red vinyl.

Although this was UB40’s debut album, many believe it is also their best album. There is a strong case for this argument. Two of its tracks would become concerts staples for years to come, “Food for Thought” and “King.”  The group’s sound was distinctive, even within the reggae world.

Ali Campbell’s reedy singing sounded like nobody else, and Brian Travers saxophone oftentimes gave UB40’s sound enough of a ska touch to make the group appeal to the burgeoning Two-Tone movement at the time. It’s easy to hear how the driving instrumental “Reefer Madness would have had ska fans getting down and dancing to it.

There’s also a sense of melancholy saturating the songs on this album. This album was, after all, released in 1980, back when the recently elected Conservative party of Margaret Thatcher had just come to power. “Food For Thought” begins with Campbell sadly noting, “Ivory Madonna dying in the dust/Waiting for the manna coming from the west.” “Food For Thought” was written to bring attention to the famine in north Africa, almost five years before Band Aid’s all-star cast recording came along.

“King” is included twice here. Once in its original form, and a second time from a BBC Radio One John Peel Session. Unlike Stevie Wonder’s jubilant “Happy Birthday,” which celebrated the life and legacy of the late Dr. Martin Luther King Jr. on his birthday, UB40’s “King” sadly cries about the downtrodden state of black America at the time. “King, where are your people now?/Chained and pacified.”

Its lyric goes on to speak of how King had a promise land dream for his people, “But they’re not ready to accept/That dream situation, yet.” Propelled by a mournful keyboard part, stinging electric lead guitar notes and a wonderfully wandering bass line, this song expertly captures all the depression and dread of those times.

UB40 would not become world famous until a few years later with the release of Labour of Love, its all covers album that featured the pop hit “Red Red Wine.” Although no one can begrudge UB40 its commercial success, many of these new fans might have missed out on the much more serious nature of earlier work. Yes, Labour of Love proved UB40 could be a darn good party band, but it was so much more than just that. Signing Off also featured one notable cover song. However, in this instance, UB40 had the smart audacity to give sarcastic and sardonic Randy Newman’s “I think It’s Going to Rain Today” the reggae treatment, which is far from a party anthem.

All these years later, Signing Off still sounds incredibly good – especially on vinyl. UB40 fans, both old and new, will genuinely love it. 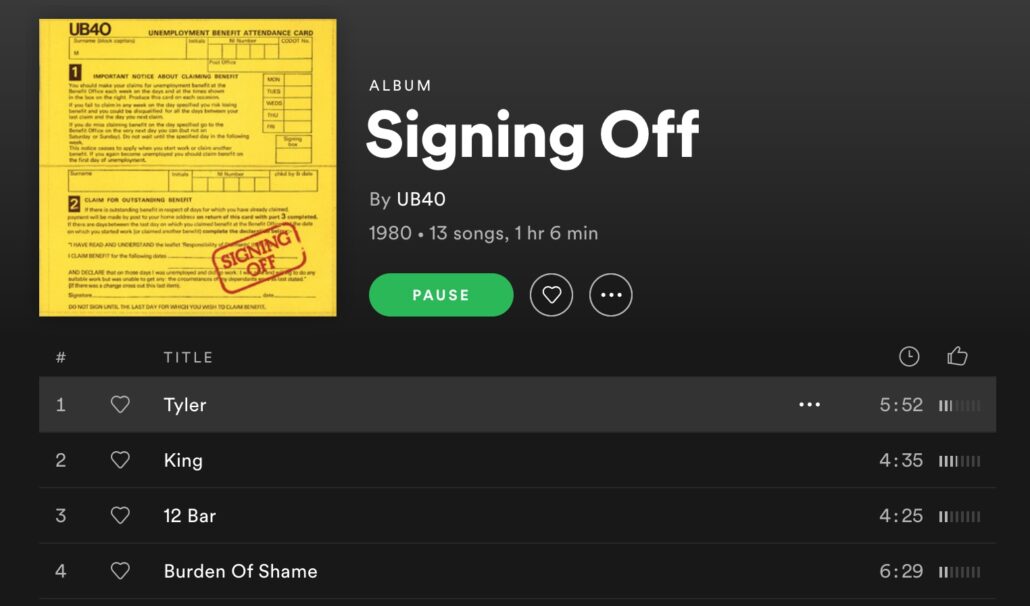