It’s tough being the the leader of a cool, retro rock band and having to save the world at the same time. But that’s exactly the task at hand for the fearless Doctor Striker and his band of noble assistants. 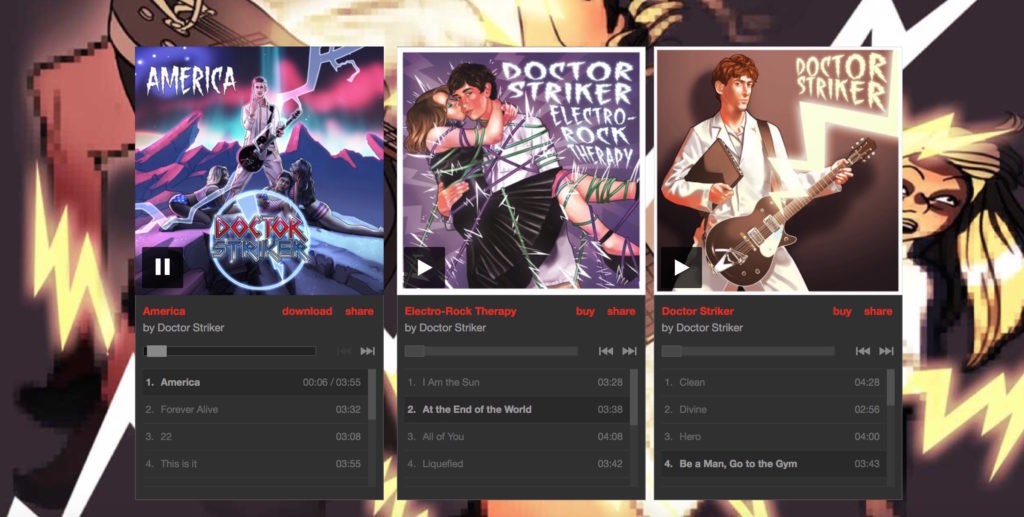 The music is 1980s electro-cool and the group is having fun creating the phenomenal artwork — much in the vein of Gorillaz — that accompanies their feats of accomplishment.  And while the superhero style may clash with the everyday life we live, Striker and his crew document in a fun way, what we mortals must endure every day.

The Doctor Striker Q and A

Doctor Striker plays Molly Malone’s on Feb. 15 and Blacklight District in Long Beach on Feb. 16. CaliforniaRocker.com editor Donna Balancia sat down for the Q and A.

We play Industrial Electro-Rock.  We are heavy on performance and include many performance art pieces in our set.  Our live show is very aggressive visually and incorporates the punk aesthetic of “everything you see is real”.  Our music is precise, simple, and powerful with virtuosic guitar playing.  Our lyrics are simple because I want people to understand our message.

How did you meet your producers?

Ha.  I am my producer.  I have produced every Doctor Striker song and album.  I learned how to produce in my room when I was 17.  I originally used Audacity and manually cut and pasted all my loops.  I’ve gotten better over the years.  I am self-taught.

What would you do differently if you did it all over again?

I would’ve formed my band earlier.  I was a one-man-band for a little over 5 years before I got my full band.  The band takes everything up to the next level.

How did the band come to learn the songs?

I give everybody in my band 3 tracks per song.  The full completed track, their individual part, and the full track without their part.

What is the songwriting process?

What do you think of the current pop music?

I think it’s cool.  It’s ok.  It’s a little samey, but I expect that when it’s all written by the same 5 people.  Max Martin is great, Stargate is great.  I don’t respect anybody who got famous before age 20.  I’m also not fond of the segregated 2 tier system where I’m stuck with a structural disadvantage because I was born without industry connections in the Midwest.  That being said, I don’t think it’s really any different now than it used to be in that respect.  I don’t know that many pop stars from the 60s, but I remember Iggy Pop.  I think it’s better to have a cult following.

How has the ability to now record a hit in your bedroom affected you?

I am able to do this project.  I would completely be out of luck if I couldn’t make music in my room.  I started recording in Michigan when I was 17.  My ability to put my ideas into solid playable music has allowed me to shop around my songs and find a much higher caliber of musicians to play with.  If I could only record scratchy demos, then I wouldn’t have the same band.

Which drug do you think influences the scene the most?