Stuck Inside is the latest album by Eric Anders and Mark O’Bitz, and the collection captures the tone of what people have been feeling for the last couple of years. Stuck Inside is as enduring as it is thought-provoking, reflecting on these times and providing a resonant dose of hope.

The award-winning duo have released Stuck Inside as the third installment of their MTC collection, AKA “music in the time of Coronavirus.” But there’s more to the phenomenon, the musicians believe than merely being stuck inside the house. The duo believes people have become stuck inside their own heads.

The versatile duo has found success with their Americana music (check out “The Best Americana from Eric Anders and Mark O’Bitz” on Spotify) Stuck Inside takes a different turn, blending the sounds of Crosby, Stills, Nash & Young with modern indie vibes. Eric and Mark met in Pasadena, Calif., but the partnership continues across the state and throughout the years.

“Many of the songs on Stuck Inside are about the extreme self-centeredness and pathological narcissism that goes hand-in-hand with the Santa beliefs I sing about in the song “Big World Abide”–being trapped inside yourself, stuck inside, and lost at sea,” Eric said. 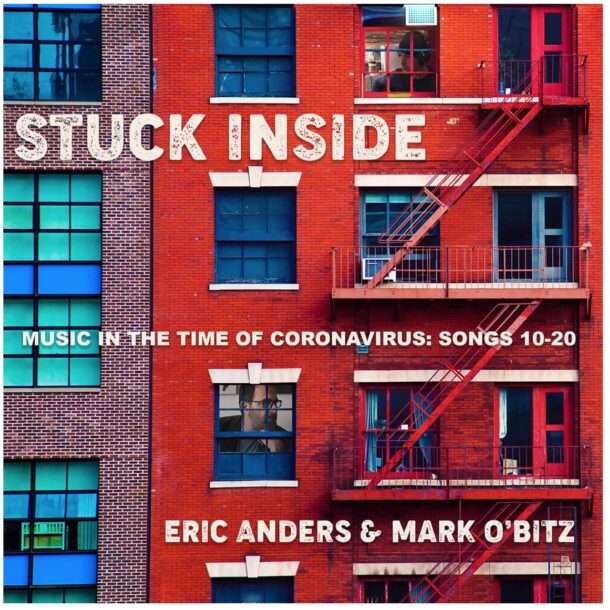 With Stuck Inside, producer Mike Butler has created a clean and robust sound and while the record is a departure for Anders and O’Bitz, the new flavor of music gives listeners an opportunity to reflect on the important things in life.

Stuck Inside is a unique snapshot of a turn in culture and in society. Each of the tracks is so masterfully created, the work almost disproves the theories Anders and O’Bitz put forth. If most people follow in this duo’s footsteps, it gives hope that there’s a great breath of air at the end of the pandemic tunnel.

“I believe that millions of people have responded to the trauma of the pandemic (combined with the trauma of Trump and the effects of global warming) by retreating into their narcissism, commodity fetishism, fundamentalisms, and the simplistic right-wing ideologies that grow out of all of these,” Eric said.

The record gives the listener a deeper dive into what so many have endured. We hope to check out these two in a live performance as we come back to life.

Listen or buy on Bandcamp.

Stream Stuck Inside on Spotify: