By DONNA BALANCIA – It used to be called “audience participation,” then it was “user response” and now in technology circles it’s called “interactivity.” Whatever it’s called, Fishbone did it first and has been doing it better than anyone else since 1979.

Fishbone was “interactive” even before most computer games, maybe with the exception of “Pong.”  And while seeing Fishbone live may be a lot like playing Mario Brothers, there’s infinitely more bang for the buck with the band.

Complete with trademark ska-punk antics, stage diving and crowd surfing, and Moog synthesizing a la “Forbidden Planet,” the Fishbone crew held a packed house captivated for several mind-boggling hours at The Roxy Theatre the other night.

Dynamic, derby-sporting Angelo Moore has been in the spotlight recently, performing in a newly announced band called Project N-Fidelikah.  It’s comprised of Angelo, George Lynch of Dokken, drummer Chris Moore, and War bassist Pancho Tomaselli.  But, Fishbone, the band he co-founded with Norwood Fisher, is quite alive and doing a lot more than just kicking. 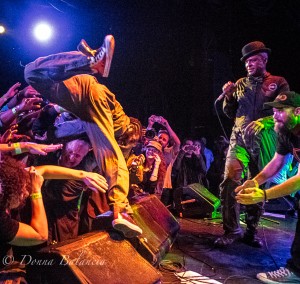 Seeing how Angelo and the guys care so much about the audience is immensely inspiring to Fishbone veterans and new fans alike.

Fans came from near and far to check out the late-1970s’ innovator of the punk-ska genre, and the crowd was prepared for a night of dancing, diving and crowd-topping.

“I’m going up,” said college-aged concert-goer Abraham, who at Angelo’s prompt, hopped to the stage, got up a head of steam and leaped into the crowd. After being tossed around overhead like a pizza dough for a few minutes, the throngs spit him back out onto the stage.  He elatedly returned to his spot in the front.

But Abraham was one of many crowd surfers — following band members like “Flyin Jay” Armant — and Angelo himself — as well as older and younger people who all took the plunge. The stage-diving and crowd surfing has been going on for many years and is considered a part of the Fishbone brand. 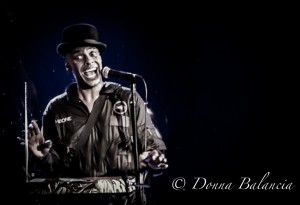 The LA-born band has endured through evolving cultural and musical styles, amassing a strong following and one or two mainstream breakthroughs.  But it’s clear the success comes from the live show — and if one were to think it’s easy to put on such a physically demanding show all these years, think again.

Fishbone was founded by bassist Fisher and Angelo, and the band is comprised of “Dirty” Walter Kibby, who plays trumpet and sings; John Steward on drums; Rocky George on guitar; Flyin Jay on trombone; and Paul Hampton on keyboards.

And it’s apparent these guys wouldn’t ask their audience to do anything they wouldn’t do themselves. To see Flyin Jay leap into the crowd to be passed around the room by laughing fans is a thing of beauty and restores our faith in what attending a concert — of any kind —  is all about.

There’s a comeraderie that comes with being together over the ages and each Fishbone band member has a distinctive character and a different voice, in addition to having great mastery of a different instrument. 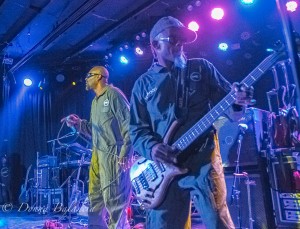 They guys even take questions from the audience — OK, they may not respond politely — but they do respond, like they did to the girl who asked “Where’d you go to high school?”

Kibby, with an ever-present beer in hand, said something that had to do with ‘your mother’ but the girl was far from offended.

But most impressive is the remarkable and inexhaustable talent of frontman Angelo with his outrageously insane on-stage maneuvers that range from the James Brown splits to the upside-down legs-in-the-air, fully inverted crowd surfing.

He plays the guitar, he sings, he plays the tuba, and has evolved into a master of the eerie-sounding theremin, which adds to Fishbone’s kooky appeal amid all the insanity.

The band plays all the favorites — starting the evening with their famous cover of “Freddie’s Dead” and wrapping with “Party at Ground Zero.”  The music is classic and the show’s oddly divine.

Fishbone remains arguably the most influential band of the punk-ska genre to this day, and is one of the most underrated rock n roll bands in history.  And they’re more fun than Mario Brothers.

Band’s ‘Personality’ Attracts Friends and Fans By DONNA BALANCIA Living Colour brought their style of bluesy punk to Canyon Club playing new songs and favorites to a packed house. The band will release a new […]

March 10, 2020 News concerts Comments Off on Red Baraat to Splash The Mint with Colorful Music to Celebrate the Holiday of Holi

By JOHN DALY Red Baraat gets the audience jumping with their Festival of Color show in an energetic music and dance performance to celebrate the Hindu holiday of Holi. The Northern India-influenced jazz band led […]