Henki is the flora-themed collaborative record of British folk songster Richard Dawson and kingpins of the new wave of Finnish heavy metal, Circle. Both parties boast an irreverent, offbeat whimsy that pervades their musicianship– medieval folklore and genre-bending abound. As the brainchild of the two ever-eclectic, always-innovating forces, it’s no surprise that the collaboration produced such a fully-fledged, peerless seven songs. Their record label, Domino Records, described the project as such: “the greatest flora-themed hypno-folk-metal record you’ll hear this year.”

The Finnish word “Henki” does not translate perfectly into English; it can be defined in a biblical or colloquial context and translates loosely to spirit or ghost. And like such nebulous specters, the group isn’t laying anything out on the table for listeners on Henki. The entire record requires the listener to truly experience what they’re hearing by a series of shrill vocal passages, occasionally abrasive instrumentation, and oft-times curious lyricism. And this thinking is not the metaphorical reflection typical of music analysis. In fact, if you were primed to parse through flora-themed lyrics for parallels with your human life, think again. The plants are front and center on Henki, there to force the listener beyond their familiar humanness, not just reflect on it with foreign experiences. For example, Circle’s frontman Jussi Lehtisalo says of the track “Silene,” “There’s one song from the perspective of a seed. It doesn’t have many lyrics, because I don’t think a seed would have too much to say in English.” On Henki, the various botany doesn’t genuflect to the human experience, they force the listener out of it.

And the instrumentation across the record features much of the same curious, worthy-of-consideration flourishes as the steadfast botanical concept. Lead single “Cooksonia” ambles forward with a series of prosaic guitar slashes that support a series of out-of-place lyrics about the banalities of maturing and higher education. Quite characteristically, the track breaks into a series of primeval “ya-ho, ya-ho, ya-ho” chants in each verse. The same balance of primitive influence and contemporary experimentalism occurs on “Lily.” The track features both Dawson and Lehtisalo unleashing a shrill, folkish chorus atop Circle’s distinctive ensemble of caterwauling instruments; it threads in and out of a catchy rock chorus and some eerie, folkish romp gone awry. Once again, “Silene” exhibits electronic ornamentation made to reflect sounds of nature (synthesized chirping birds and pixelated rain droplets) beneath the track’s focal point, Dawson’s insouciant lilt.

Henki is at the cutting edge of primordial soundscapes. The record is somehow able to balance a devotion to such a niche artistic concept whilst remaining dedicated to the quality of their experimentalism. Throughout the record, the unconventional wit of both Dawson and Circle work in tandem to create something bracing and invigorating, like a car crash that you just can’t look away from, a brilliant, graceful, fascinating car crash. The inventive troubadours are in full-bloom on Henki. 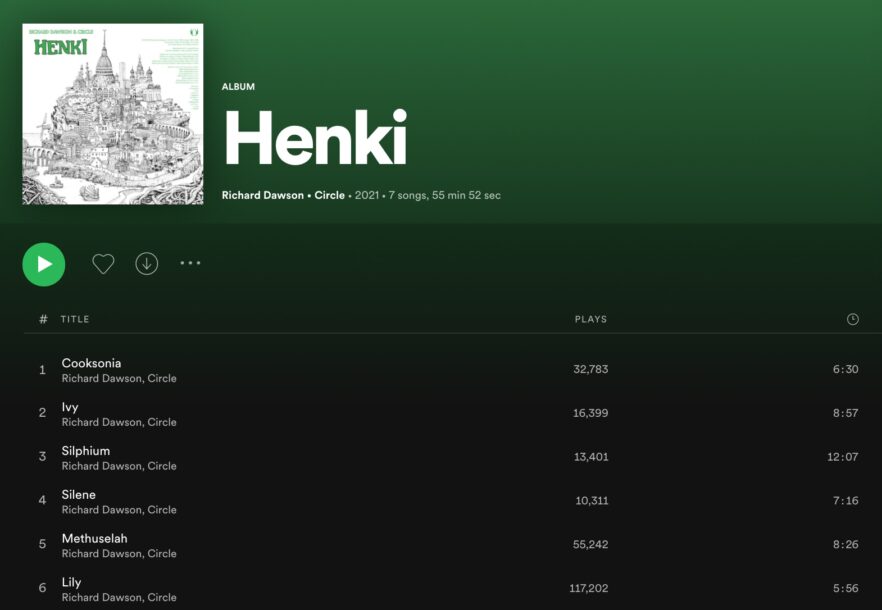