Aaron Sorkin’s directorial debut, Molly’s Game, which received an Oscar nomination Tuesday, hit theaters late last year, featuring a stunning Jessica Chastain as the titular character. The film revolves around the true story of Hollywood’s Princess of Poker, with Sorkin at his screenwriting element after having already penned fascinating biopics of contemporary figures in Steve Jobs (2015) and The Social Network (2010). 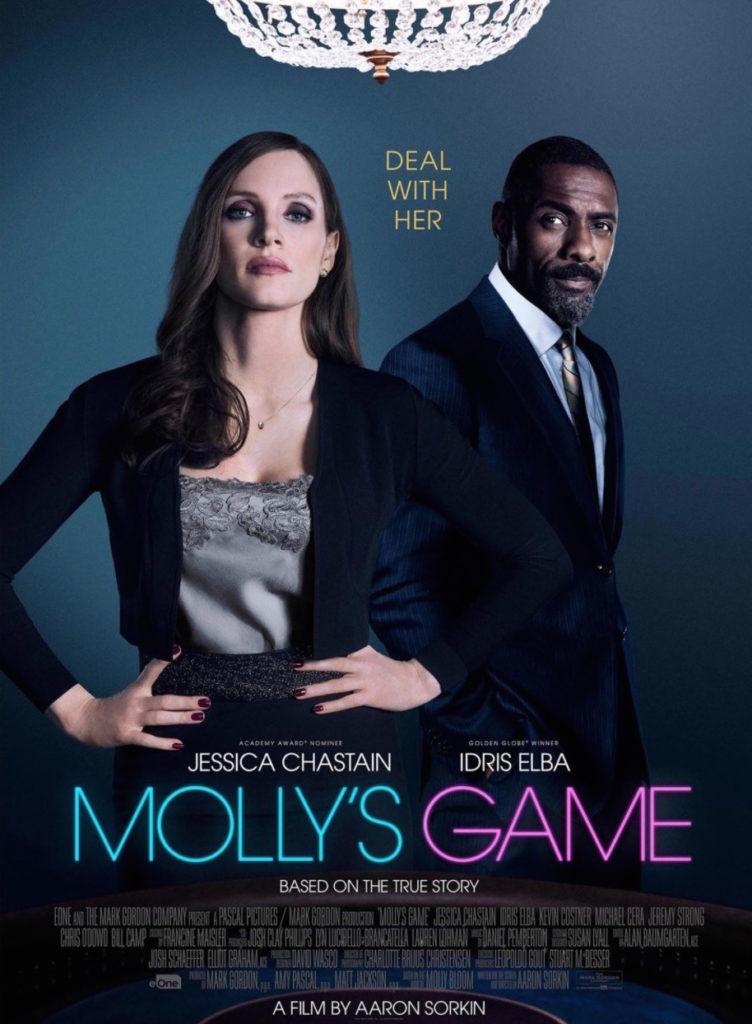 The film opens with an Olympic career-stopping accident that sends Molly to the world of underground poker, first as an assistant to an arrogant boss and, later on, by herself. The business grows and so does she, trading up clients from Hollywood celebrities and directors to New York’s big-time tycoons and mobsters. The illegal gambling ring, which ends with an FBI bust, is indeed Molly’s world. In here, life comes at you pretty fast – and so does the dialogue.

Fans of Sorkin’s writing will recognize the sharp, machine-gun dialogue in Molly’s Game, which traces the dramatic rise and fall of the world’s largest high-stakes illegal gambling ring. Sorkin impresses with visually creative storytelling, with the soundtrack perfectly complementing his distinctive writing style.

The movie features a 20-part soundtrack by Daniel Pemberton, who also did the award-winning soundtrack for Steve Jobs. Molly’s Game caps off an impressive year for Pemberton, who created music for the likes of Ridley Scott’s All the Money in the World and the Black Mirror season 6 Pilot USS Callister.

Regarding his film’s soundtrack, Sorkin shares with Soundtrack.net that working with Pemberton was one of the pleasant surprises of his directorial debut. “Daniel became nothing less than a co-author of the film,” he says in an interview. “And I’ll be forever grateful that he followed his instincts instead of my instructions.”

Soundtrack World explained Pemberton’s instinct to create a soundtrack that sounded as if it was written by different bands instead of a solitary film composer. The musician conveyed, “I approached it more from a rhythmic rock way than a melodic, traditional film composing way.” Much like Sorkin’s visual work for the film, the critically acclaimed composer looked at things in different angles.

The result is an extensive soundtrack that’s part smooth ‘70s funk, fun alt-rock, and exciting rhythm and blues, cackling with energy and mixing perfectly with the pace of Sorkin’s dialogue. The scoring sets the backdrop for Chastain sauntering through the world of illegal gambling, and it’s clear that Pemberton’s straight flush style is a winning hand. Highlights include exciting heist pieces Set it Up and Play Your Hand, as well as the exciting track The Russians, and the quieter thoughtful breaks like Molly’s Journey and Raided. The final track, All the Beauty in the World leaves listeners in a hopeful, satisfying end.

Complementing the original soundtrack are the film’s song credits, which opens with Thunderpussy’s fun and female-centric rebellious track Velvet Noose and includes supergroup Temple of the Dog’s Say Hello 2 Heaven. The song credits borrow energy from rock tracks and classic gambling songs alike, such as Kenny Rogers’ The Gambler and Frank Sinatra’s Luck Be a Lady.

The music in Molly’s Game perfectly captures the excitement and tension of high stakes poker. Many of these songs continue to be favorites of poker players. While the underground poker scene portrayed in the film may no longer exist, high stakes poker continues to be very popular in a heavily regulated industry. Partypoker in their list of the ‘Top 5 High Stakes Poker Players’ state that the best players of the game often win multi-million dollar pots. It is not hard to imagine that many of world’s best poker players learnt the game in VIP games, like the ones depicted in Molly’s Game. The next time you play poker, put on the Molly’s Game soundtrack to create a similar exclusive atmosphere.

By JOHN DALY Temple of the Dog the supergroup comprised of Soundgarden’s Chris Cornell, Pearl Jam’s Jeff Ament, Stone Gossard, and Mike McCready, and drummer Matt Cameron of Soundgarden and Pearl Jam, have released a […]